The challenge to produce clean and sustainable power for future generations is an intimidating one. While fusion power offers the tantalising possibility, it is tomorrow’s technology that is at least 30 years away… and it seems always will be. In all reality, however, it will be far more than this, so it’s fair to say the challenge isn’t just intimidating, it’s downright terrifying.

Not many understand the sheer scope of the problem more than Professor Steven Cowley, chief executive of the UK Atomic Energy Authority (UKAEA), head of the Culham Centre for Fusion Energy, and respected world authority on the subject. Professor Cowley has dedicated his life to understanding fusion reactions, and explained the scale of the materials and engineering challenge to make it a practical source of electricity production at the IOM3 annual lecture last month.

“I believe we are going to need fusion power at some point,” he stated. “I can’t guarantee there will be a fusion reactor in the future, but if we don’t solve some materials problems I guarantee there won’t be.

“We are within striking distance of demonstrating that fusion is possible, but I don’t see us quite at the point of being able to show that it is economically viable. And much of the problem is in materials science and engineering.”

The UK is well placed in the fusion power materials race. The Culham Centre for Fusion Energy has the world’s number one fusion reactor in JET, the Joint European Torus, the only machine to have produced a ‘significant’ amount of fusion power in a controlled way. However, it is just a baby step down a very long road.

The next phase of this journey is the construction of ITER (The International Thermonuclear Experimental Reactor) in southern France, the first machine that’s hoped to achieve a self sustaining fusion burn. The timescale is predictably slow and delayed. Now, that’s not to appear cynical or defeatist of the project, more an acknowledgement that this is a genuine trip in to the unknown where such things tend to come as standard. Fusion power, coupled with a manned misson to Mars, are arguably the greatest engineering challenges for the next several generations. Make no mistake, even in its current undeveloped state ITER is – and certainly will be – an impressive piece of technology. 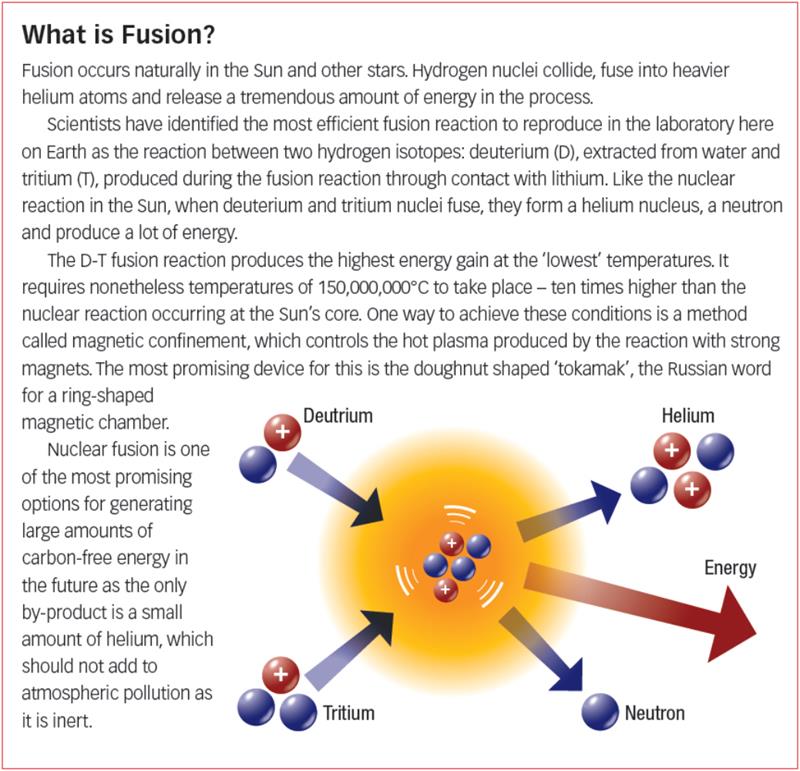 The scale of the problem becomes clear when numbers start to be added in to the equation. The fusion reaction between deuterium and tritium generates plasma temperature to the tune of 230,000,000K that will be contained by magnetic pressure of over 100atm within the central vacuum chamber of the doughnut shaped reactor. At the centre of the reactor are superconducting magnets that need to be kept at just 4K. The two massive extremes in temperature will be just metres apart – an indication of the demands on the material properties this structure will have to cope with.

If predictions are correct, ITER will produce just over 0.5GWatt of power in a self sustained fusion burn lasting from 100s up to 2000s. Current estimates are that full fusion experiments could begin in the late 2020s.

“Any fusion power station really needs to be a maintenance system with a reactor on the side,” said Professor Cowley. “So much of it will have to be replaceable. All the components will take wear and tear, and will need to be taken out of a nuclear environment remotely and either stored or disposed of.”

This includes, for example, hundreds of tonnes of super conducting magnets. The reality is it’s simply not good enough to make plasma, neutrons and a fusion reaction. The whole structure needs to last at least survive several years of operation for practical fusion to become a reality.

“It is enormously challenging,” said Professor Cowley. “Our ambition though is that the UK gets to design it. It’s a big engineering job and is one of the most challenging things we will ever set out to do. We have to start thinking, what are the materials we are going to build this from? How are we going to do the engineering? We would have to do this with industry and universities and really collaborate.”

While Professor Cowley conceded there are masses of materials problems, he highlighted what he sees as the two main challenges. The first is what he describes as the development of high heat flux materials. These are materials capable of surviving such brutally high temperatures. Although temperatures at the wall of the reactor are significantly less than the centre of the plasma, they can still range from 3,000 to 10,000K.

There are two vital components here: the blanket and the diverter. The blanket will cover the interior surfaces of the vacuum vessel and provide shielding from the heat and neutron fluxes produced during a fusion reaction.

The neutrons are slowed down in the blanket where their kinetic energy is transformed into heat energy and collected by coolants, possibly flowing within the walls. These channels could likely be produced using additive manufactured processes. For purposes of maintenance on the interior of the vacuum vessel, the blanket wall will need to be modular and will consist of 440 separate 1 x 1.5m, 4.6 tonne, individual detachable segments.

“The plasma sits in the middle of the doughnut shaped chamber and the heat and helium work their way to the outside of the chamber due to eddies that carry them across the magnetic field,” explained Professor Cowley. “These then flow in to what we are calling the diverter, which will carry waste heat and waste helium away.”

And here is another major materials challenge. ITER will put a predicted 100MW of waste power in to the diverter, which to date is designed as a very narrow channel. It needs a material capable of handling a plasma load of 50MW/m2, and that is simply not possible with any current material.

“The first thing is to get that heat load down,” said Professor Cowley. “Like any heat exchanger we want to spread the heat over the biggest possible area.”

By revising designs it might be possible to get the load down to about 5MW/m2, but even this is an ambitious target for material survivability. Tungsten is proposed because of its durability, but even then it is not certain to survive.

“There are all kinds of problems,” explained Professor Cowley. “The tungsten has to be above a certain temperature because of its brittleness. But, it has to be below a certain temperature because it makes what we call ‘tungsten fuzz’ on the plasma surface, and this cuts down on the heat transfer, so surface temperature goes up. And, we have got to restrict the erosion of the tungsten surfaces to below 1mm per full power year, as we only have a few mm between the surface and the coolant channels inside.”

The other problem for materials used will be exposure to the nuclear environment, notably the neutrons. Most of the neutrons come from the middle of the plasma and journey outwards where they will hit the inner tungsten blanket wall, and degrade the materials. Neutrons from a fusion reactor have 10 times the energy compared of those produced during a fission reaction.

Neutrons produce helium inside tungsten. They strike grain boundaries inside the crystalline structure and begin to line them with helium molecules. This build up continues until the material becomes embrittled, full of defects, voids and flaws.

“After five years of running it will be not tungsten,” said Professor Cowley. “It is some weird alloy of tungsten, packed with helium. So will it be strong enough? Will it hold? Will the helium embrittlement mean we’ll never make walls that will last long enough?

“We have got to produce a new generation of materials – not only for fusion, but for fission as well.”

Indeed, Culham has a new materials facility that will test medium irradiated materials cut in to micron sized samples for strength, embrittlement, and all sorts of properties.

“We haven’t solves this problem,” concluded Professor Cowley. “We have just begun to get started on how we might do this.”