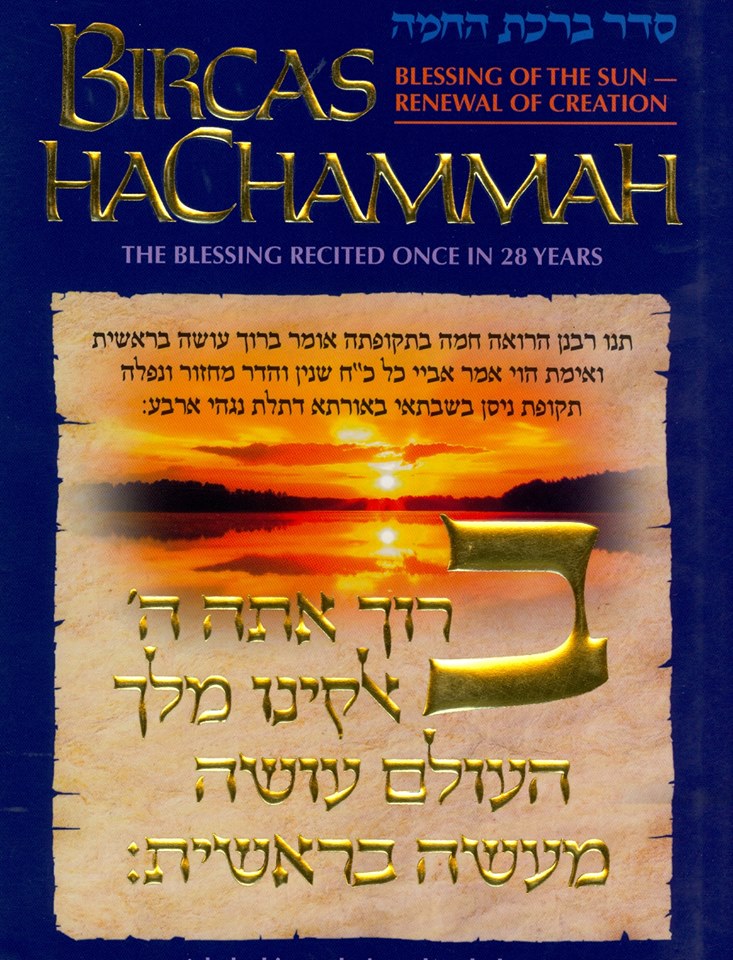 In the beginning of G-d’s creation of the heavens and the earth……G-d said: “Let there be light!” _ and there was light.

On the third day of Creation, G-d said: Let the Earth sprout vegetation: seed-bearing plants and trees and fruit that produce fruits with seeds according to their species on the Earth.”

On the fourth day of Creation, G-d said, “The luminaries (sun and moon) shall be positioned …to separate between the day and the night! They will serve as omens (signs)….and will determine the time of the Jewish Festivals.”

In the process of G-d’s Creation, life on Earth began before G-d positioned the sun and moon through photosynthesis and the Light (and energy) of the Creation.

On April 8, 2009 we walked outside our Synagogues and recited the blessing of Bircat HaChammah (the blessing of G-d who created the Creation.) This blessing is offered every 28 years corresponding to the Machzor gadol or “great cycle.” According to Jewish tradition this 28 year cycle synchronizes the Sun and Earth at the precise vernal equinox at the time of the placement of the luminaries in the heavens on the fourth day of creation. On April 8, 2009, the 19 year lunar cycle and the 28 year solar cycle were reset coincidentally. This will not happen again for 532 years. Thus mankind in its current large state of population is in a 28 year window which will not be repeated given his dependence on finite fossil fuels for energy.

Numerous references in Torah, Tanach, and Oral Tradition teach us of G-d’s infinite energy. The Sun is the secret. Therefore, every 28 years we bless G-d who created the Sun and strive to learn the secrets of its energy.

The Zohar teaches us that numerical equivalency of Hebrew words is a sign that two things are related to one another. The Zohar points out that the Hebrew words for “light” and “secret” are numerically equivalent. Further, the Hebrew word for energy is equivalent to 28 which is the period of the Machzor gadol as marked by the Bircat HaChammah.

Three hundred and twenty five years ago, Sir Isaac Newton showed us how to travel to the moon with his theories of gravity, inertia, and F= MA (force = mass X acceleration.) In 1960, John Fitzgerald Kennedy challenged America to build the technology to take American’s to the moon and bring them back alive as Newton predicted. We did it in less than ten years.

The Sun does this through a process known as nuclear fusion.

Through the process of controlled nuclear fusion, one gram of matter can be converted into the equal amount of energy provided by over 2,400 gallons of gasoline. That equates to over 57,000 miles per gram of matter in an electric car charged on the grid powered by fusion energy.

Now, let us assume a dynamic and visionary leader of the United States challenges America to build the technology to make scalable fusion energy reality. Remember, by converting one gram of matter, we create the equivalent energy of 2,400 gallons of gasoline. Scientists agree this is possible in less than thirty years, before the next blessing of G-d who created the Sun. We can create hundreds of thousands or millions of tiny little suns on Earth. Once the technology is developed the cost of the fuel source is pennies per gram.

Consider the impact total and complete World Energy independence will have on the balance of power in the Middle East within the context of Iran’s Ahmadinejad’s Statement of September 23, 2008 before the UN wherein he parroted Hitler, blaming Jews the world over for all the World’s problems, and effectively calling for the disintegration of the “cesspool Israel” and by extension the U. S.

Consider the impact on global warming if fossil fuels are no longer being burned. Problem solved. End of discussion.

Consider the societal implications as America becomes reborn again with a mission in the world even grander than Kennedy’s moon challenge. America has a history of rising to its challenges. Education will be fixed. Thousands of new companies will be formed each contributing in its small way to the project. Hundreds of thousands of new high paying jobs will be created. Americans will again acquire a sense of country, duty and a sense of purposefulness in the world. America will reassert its world wide preeminence.

Listen to the audio teaching “The Secret of the Sun: The Great Luminaries and the Clarification of Reality” by Rabbi Asher Crispe